Why Considering a Treatment’s Extension of Service Life is Important

Local agencies know the costs of capital preventive maintenance (CPM) treatments; they are aware of the cost per lane mile (kilometer) for the treatment options. However, a treatment’s value in terms of the extended service life (ESL) that it provides to a specific section of road is seldom known beyond theoretical studies. If it is possible to determine a pavement’s ESL as a result of a treatment, then agencies can gauge cost effectiveness of treatments in terms of a pavement’s service life.

With Roadsoft’s new Extended Service Life Calculator, accurate ESL analyses are possible for CPM treatments. When ESL analyses are based on local treatment data, agencies can set data-driven policies for applying specific treatments and can quantitatively measure how treatments might perform in particular locations. This type of cost-effectiveness data can also be used to convince elected officials and the general public that certain CPM treatments are the most efficient means of maintaining road networks.

Measuring the Effects of a CPM Treatment 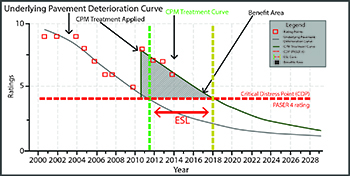 The ESL benefit directly affects the cost of roadway maintenance since it creates a tangible extension in pavement life. The benefit gained by a treatment can be measured, using deterioration curves, in one of two ways. The first method defines benefit as the improvement in pavement condition over time as a result of the treatment. While this method of measuring benefit acknowledges improvements to the roadway (smoother ride, less visible distresses, etc.), these may not result in longer pavement life. The drawback to this first method is how difficult it is to relate the benefit of a generally-increased pavement condition over time to a dollar value for road agencies or the motoring public.

The second method measures benefit by the ESL that results from a specific CPM treatment; it also evaluates the time before a pavement needs expensive treatments such as rehabilitation or reconstruction. Therefore, ESL is measured as the additional time in years that the pavement is above the CDP due to treatment.

In their discussion of the results, the researchers stated that, because of the conservative nature of the study and their strict selection criteria, these results should be considered the minimum ESL gain for these treatment methods. The most-recent report, 2018 Michigan Local Agency Pavement Treatment Life Study, is accessible from the CTT's Asset Management Resources page.

The Center for Technology & Training is part of the
Department of Civil, Environmental, and Geospatial Engineering
at Michigan Technological University.